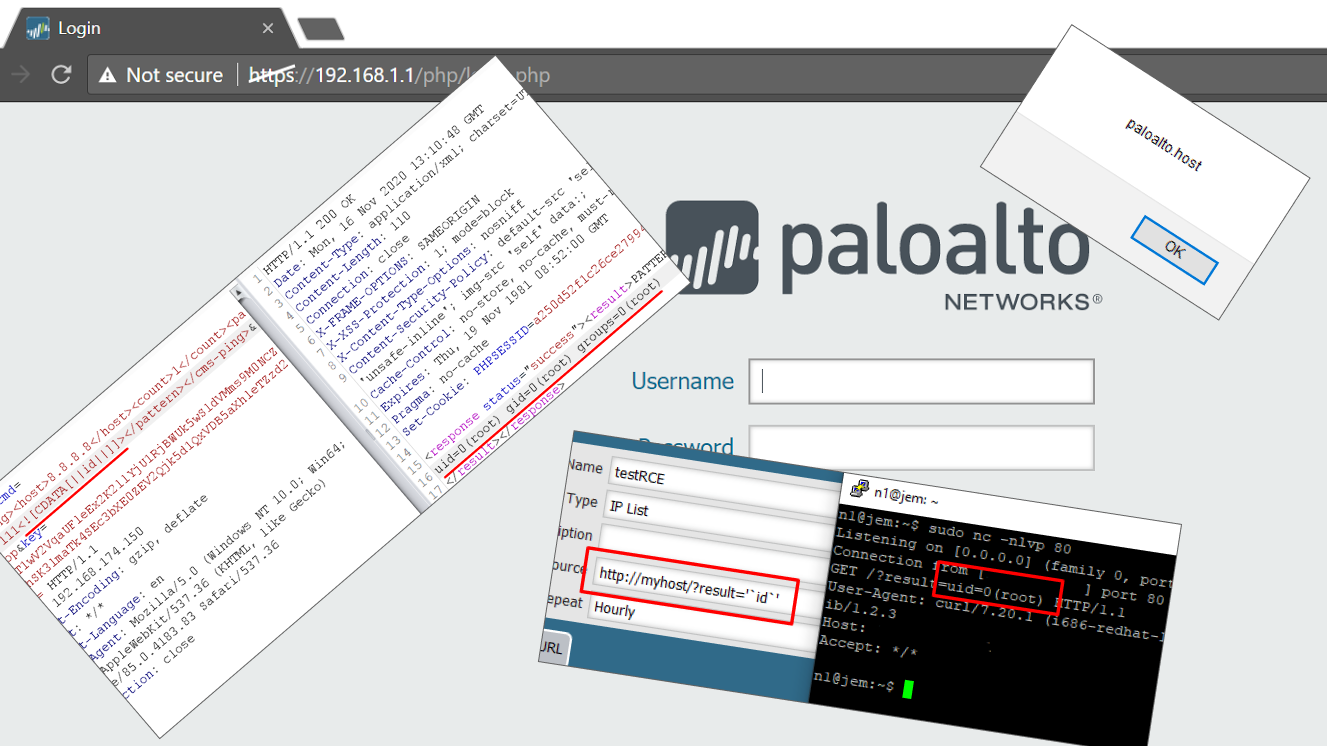 The first vulnerability was detected during a black-box analysis of the firewall web management interface and occurs due to the lack of user input filtering. PHP scripts handle user requests and then forward all relevant data to a service listening on a local port. It parses the data and the results are returned to the user of the web application.

To exploit the CVE-2020-2037 vulnerability, we first log in to the web management interface.

On the Objects tab, go to External Dynamic Lists.

Now we need to add a new list source and enter our payload in the Source field. It’s important to note that this vulnerability is a blind OS command injection. An external service or an out-of-band payload are required to view the results.

The step-by-step discovery of the blind command injection:

A detailed examination of the web directory revealed the folder /var/appweb/htdocs/php/rest comprised of PHP files. The file RestApi.php contained a class describing a client’s interactions with PAN-OS via RestApi requests (XML queries). On thorough examination of the script, the execute method of the RestApi class was found.

Authentication was a prerequisite for the use of this method. Meeting all the prerequisites enabled the user to work with different types of requests. We found the descriptions of these requests in the official Palo Alto Networks documentation at PAN-OS XML API Request Types and Action and Run Operational Mode Commands (API). This information significantly facilitated our analysis.

Our primary interest was the op (operational mode command) request that called the buildOpRequest (private method) handler and allowed the performing of certain diagnostic system calls. The request content was checked for required cmd parameters:

Presumably, this method assembled an XML request that was sent to a third-party server for execution. Analysis of the PAN-OS internals allowed to identify the recipient: the mgmt service. This service was responsible for the subsequent processing of our request.

By looking through the official documentation and running strings on the binaries, we were able to find the library responsible for parsing and analyzing system commands. Now we knew the handler of interest. It was then determined that the values of the command arguments in the xml were extracted as-is and inserted, with the help of a format strings, into  commands passed to /bin/sh -c <сmd> for execution.

However, things turned out to be trickier than expected. As we discovered later, at one point the request contents were filtered and checked for correctness. This stopped us from directly executing the commands that we sent, although they were still being extracted without any restrictions.

We ultimately overcame this setback thanks to a certain subtlety in the handling of XML content that finally allowed us to call arbitrary system commands.

The firewall uses the nginx web server. The main nginx configuration file is located at /etc/nginx/nginx.conf.

The main configuration includes additional configuration files. We are particularly interested in the file /etc/nginx/conf/locations.conf.

Here we see the handling of the /upload URL.Requests to this URL are redirected internally to the named location upload_regular. The request body is passed to back_upload_regular and the /etc/nginx/conf/upload_default.conf configuration file is included, which we will discuss a bit later. Finally, the request is proxied to http://$gohost$gohostExt (http://127.0.0.1:28250), which turns out to be a local Apache web server. Now let’s look at upload_default.conf more closely.

This file configures nginx-upload-module. The module obtains files from the user and stores them on the system. In our case, the module can be accessed at the URL /upload. Note the upload_cleanup directive, which deletes uploaded files if codes 400, 404, 499, or 500–505 are returned.

By sending a POST request to /upload, we can see that Apache responds with code 301 (visible in the response body) and the nginx proxy responds with 200. These particular codes do not trigger the deletion of an uploaded file.

To verify the vulnerability, we tried to upload a large number of files to the server. Initially, the main disk had 15 GB of free space.

We tried to open the web management interface but could not log in. Most likely, this happened because PHP failed to create a session file on disk, due to the lack of disk space available.

As a result, we were able to conduct a DoS attack on Palo Alto NGFW components acting as an unauthenticated user.

The last vulnerability was discovered in the script /unauth/php/change_password.php.

The script makes use of the $_SERVER['PHP_SELF'] variable, which is user-controlled. This variable is inserted into an attribute value in the form tag without any filtering, thus making the XSS vulnerability easily exploitable.